The Acts Of Kindness Jar. 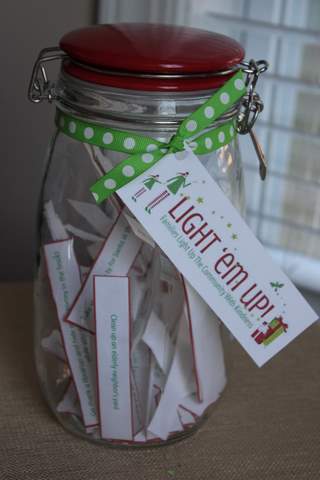 Just after Christmas, I posted on my Facebook page about a 'Happiness Jar.'

The idea is that you write good things that happen down on pieces of paper, pop them in the jar, and then on New Years Eve you get them all out and read about what great things happened during the year.

I am doing that, and although there isn't a great amount of pieces of paper in there yet, I can see that there will be by the end of the year.

The other day I was going through Pinterest and I found the photo above with another great idea.

The 'Acts Of Kindness Jar'.

The idea for this one, is that when a child is unfriendly, they have to go and pick a kindness act to perform for the person they were unfriendly to.

I think this is perfect for us.

With my eldest son's autism, he gets so angry and frustrated at times, that he doesn't quite know how to deal with that anger and frustration in an unharmful way.

It is never outside the home, as he just doesn't have the confidence and is normally fairly withdrawn and quiet. It only ever happens at home where he feels the most comfortable and it is always directed at his younger brother.

It doesn't matter that I have told him a million times it is very important he keeps his hands to himself and uses his words instead.

When he gets to the point of being very angry, he loses the ability to think rationally and remember instructions.

In a sense he briefly loses control, but then instantly regrets it as soon as the moment is over, as he knows what he did was wrong.

So as a result, my youngest is always the receiver of kicks, pushes, pinches or slaps!

I have been trying to figure out what to do about it, as my telling him off and putting him in time out just isn't working.

Neither is yelling and showing my anger and my frustration.

And it makes me feel bad, because he really can't help it.

So I have been thinking of a better way to handle it, and I think this could be it!

By making him choose a good deed out of the jar, it is removing him from the situation to help him calm down.

It also means that while I'm not exactly disciplining him for something that is out of his control, I am still helping him to make amends, and show kindness instead of the alternative.

Some examples of good deeds could be letting his little brother play with one of his toys, or taking his brother's dirty dishes across to the sink after dinner.

I guess all I can do is give it a try, and see what happens.

What do you think?

Would you consider putting something like this in place in your home?

I would love to hear some of your good deed ideas! Please?

Linking in with Jess and the others for IBOT.