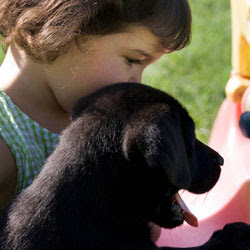 Shelby loved having her new little friend to spend the days with her, and they spent absolutely every minute together. Playing with Blackie helped to pass the time so the days weren't anywhere near as long, or as lonely. Shelby showed Blackie how she dressed her only doll, and how she hopped over the cracks in the pavement. She took Blackie to her special hiding place in the woods behind her yard, the only place she felt safe on the occasions her father came home drunk, or angry. She fed her from her own meals and gave her other little titbits that she could find around the house. Daryl wasn't that regular with doing the shopping, but there was usually bread and milk, if nothing else.

When her father wasn't home they played inside and out, and when he was, they stayed quietly in her room, or out in her special spot in the woods, if the circumstances called for it.
Blackie slept on Shelby's bed and stuck by her side, as if she knew that to venture far would be dangerous.

Blackie woke and lifted her head. It was still dark, and the only thing breaking the silence was the tiny rasp of Shelby's breathing.
She stretched and hopped off the bed, sniffing the floor around her bowl but not finding anything interesting. As it was quiet, she padded out to the kitchen to see if there were any crumbs left over from dinner. Sometimes, if she was lucky, there would even be a crust that hadn't quite made the bin.

Turning to go back to Shelby's room, she was suddenly thrown across the floor. She shook her head and looked up, and saw the man. He was standing in the doorway, leaning on the door frame to keep himself steady.

"I said I didn' wanna see ya, mutt," Daryl slurred, his voice sounding like gravel.

The terrified dog whimpered and looked for somewhere to hide. As she tried to get under the nearest cupboard, Daryl's boot caught her, this time, on her hind leg. The sound of the bone breaking echoed throughout the kitchen. Urinating in terror and yelping loudly from the pain, Blackie struggled to move, and he took aim again. The final kick caught her square in the middle, lifting her completely off the ground and sending her flying through the air. The sound of the impact was masked by an almighty scream, that bounced off every surface in the derelict house.

Shelby, woken by the noise and discovering her puppy gone, had run into the kitchen just in time to see her precious pet colliding with the wall. She didn't even realise she had started screaming; it was like a well of hurt, fear and trauma that shot to the surface like a newly discovered spring. Once it started flowing, it poured out of her, uncontrollably.

"No, no, no, no," Shelby screamed, as she ran to her broken puppy. She cradled the dog in her arms while the tears poured down her face, and into her limp dog's fur like little streams. Still wailing, she turned to look at her father. The gleam in his eye terrified her, and she knew it was very likely that she was next, but she couldn't stop. The emotion from years of abuse came hurtling from her very core, and even when her voice disappeared, her screams still came out in a whisper.

Daryl staggered towards her, his fury palpable in the tiny kitchen. A glimmer of silver on the kitchen table caught his eye and he turned and headed in that direction. For a brief moment Shelby thought, hoped, he was going to leave. She watched him lean on one of the chairs, and reach into the middle of the table, and when he turned back towards her, she saw, to her horror, that he was holding a metal wrench in his hand.
He saw Shelby's eyes widen in fear, and he smiled maniacally.

Wielding his weapon of choice, he started back towards Shelby. He swayed, as the effects of the alcohol momentarily took over, and his foot slid in the urine on the floor. Too drunk to keep his balance, he fell, with the side of his head smashing on the edge of the kitchen bench on the way down.

It all seemed in slow motion for Shelby. One minute she was preparing herself for the assault, and the next minute he was on the floor, his eyes wide and staring, and a pool of blood spreading around his head. At first she was too scared to breathe, just waiting for him to move, but after a few minutes she realised he was never going to move again.

She looked down at the puppy in her arms and fresh tears fell at the loss of her only friend. She hung her face into the soft fur and sobbed, her little heart shattering into a million pieces.

Did she just feel movement?

Looking closely at the puppy's swollen face, she searched for any sign of life, but was sure she must have imagined it.

Slowly, a dry tongue flipped out and gave Shelby a tiny lick on her nose!

She screamed again, although this time with joy. She hugged Blackie a little too tightly and the dog yelped.

"I'm sorry, I'm sorry," Shelby cried, thrilled that her pet was still alive, but knowing she had to get help, fast.

"Hello! Can you hear me?" a female voice rang out.

Shelby froze. Not sure of what to do, she stayed still and quiet.

"Heelllooo," the voice said again, this time followed by footsteps. They got closer and closer, until appearing in the kitchen doorway, was a nicely dressed lady and a police officer.

They looked at the frightened little girl, and the body of the man on the floor, in shocked silence, until finally the lady spoke.

"You poor dear. What on earth have you been through?"

While the policeman radioed for assistance, the lady walked over to Shelby and bent down in front of her. She had a very kind face, and smiling eyes, and Shelby felt comforted by that.

"Sweetie, my name is Patricia, and I work with the police. We had reports from neighbours of trouble here. Are you hurt?"

Shelby shook her head, but then opened her arms and showed Patricia the injured puppy.

"How about you and I take your little friend to be seen to? I doubt very much that you want to stay here."

Once again Shelby nodded, and allowed Patricia to help her up.

As they walked out of the house towards Patricia's car, she said "I don't think you'll be coming back here, dear."

Shelby briefly looked over her shoulder at the only home she had ever known.

Then she looked down at her dog, and the shadow of a smile passed her lips.

No, she wouldn't be coming back here.

Linking in with Penny from A Mum in the Wild for Short Tale Tuesday.

Also linking in with Jess from Diary of a SAHM for IBOT.