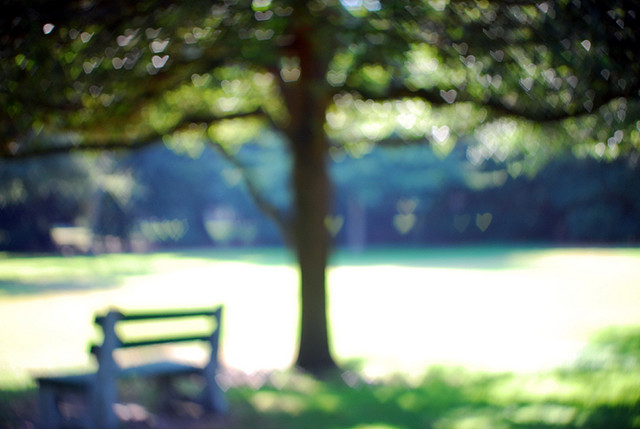 
The timber seat under the tree was empty, just as she'd hoped it would be. She quickly wiped off the slight dew that had settled on it, and wiping her hand on her jeans, she sat and looked around her. The wet grass was glistening in the morning sunlight, and the trees stood mostly still, except for the slight fluttering of the leaves. The walking track was empty for the moment, but she knew that it wouldn't be long before there was a constant stream of walkers, runners, and other people out enjoying the cool autumn sunshine.

She drew her jacket around herself, as the early chill was still on the air. The steam from her breath made swirls, and it reminded her of the smoke rings she used to try and make when she was a much younger girl.
The breeze rustled the leaves of the tree above her, and blew a hair across her face, which tickled her nose. She absent-mindedly brushed it away, and nervously bit her lip, suddenly aware of the knot forming in her stomach.

She sighed. Maybe this was stupid, she thought. Who was she kidding? Men like him didn't go for women like her. Not for anything serious anyway. Maybe he didn't even read her note. Or maybe he did, but one look at who it was from, immediately prompted him to throw it in the bin! After all, there was nothing between them. An attraction, yes definitely. But nothing solid.

As her mind continued wildly going over all the possibilities, she pulled up her sleeve slightly and looked at her watch. 9.35am.
"How long am I going to sit here like a spooky loner," she said out loud, then quickly checked around to make sure no one was in hearing distance.
Great, now you're talking to yourself, she thought. Yep, you're a great catch!

She giggled despite herself, and shivered. At least it dissolved some of her tension.

Out of the corner of her eye, she could just make out someone walking towards her on the path, but she was almost too scared to look. With her heart pounding in her chest, she brushed some imaginary dust off the sleeve of her jacket and glanced in their direction.

Is it him? It could be. But they're wearing a hat, and she's never seen him in a hat before.

As he got closer, the familiar swagger made her catch her breath. Oh my God! It is him!

They smiled at each other as he got closer still, taking his hat in his hands and shading his eyes in the sunlight.

He quietly sat down beside her, neither of them sure of what to do or say next.
She couldn't remember the last time she'd felt this happy.

"You came" she said, barely louder than a whisper.

She looked at the view across the park, with a smile on her face and the slightest glimmer of a tear in her eye.

This was going to be a great day.