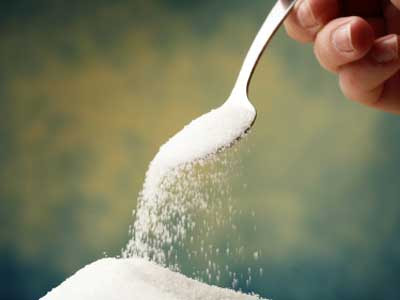 It wasn't a sudden decision! I had actually been planning it for months. And a plan is exactly what you need if you're going to be successful. Which I have been....so far.

I just got to thinking one day, about the amount of sugar I ate, and decided it couldn't possibly be good. I mean, the experts recommend no more than ten teaspoons of sugar a day, yet I would have that just in my cups of tea alone. Then there was also the bickies or cake after lunch, and the chocolate that I liked to nibble on of an evening, as well as ice cream sometimes. Not to mention all the sugar that was in food that I wasn't really aware of even having sugar in it, such as sauces, mayonnaise, muesli bars and cereals. Of course I knew that some had sugar in them, but I wasn't aware of just how much!
Did you know that tomato sauce is roughly 50% sugar? And BBQ sauce is even worse?
Now that I'm reading labels for everything I buy, I'm amazed at the types of things that have sugar, and how much.

It was recommended to me to read the book 'Sweet Poison', by David Gillespie, which I did, and boy, was it an eye opener! If you want to learn more about David and his book, click here, but basically this book is the result of David's mission to learn about what was making him obese, and why diets never worked for him. What he discovered is pretty scary stuff!

If you don't want to read an entire book on the subject, then a good article was written by David DiSalvo at Forbes.com, which will only take a couple of minutes to read. It briefly explains similar things to that which David discovers during his research. Click here to read the article.

If you too eat a lot of sugar, it would really be worth you looking into it a bit further. It was enough for me to say 'enough is enough' and give it up. And I have to say that I thought it would be a lot harder than it has been! In seventeen days now I haven't had any chocolate at all, which is a miracle in itself! I never thought I could go without chocolate!

I'm not saying that I won't ever have sugar again! I'm happy to occasionally meet a friend for coffee and cake, for sure! But it won't be a part of my diet on a daily basis any more, and it is no longer going to control me like it did.

I'm doing it for myself, and my children. Even my husband is giving it a go now as well, although he is happy to stick to products that contain less than 5g of sugar per 100g, rather than giving it up completely like me. But that's a start.

What about you? How much sugar do you eat, and how much is too much?