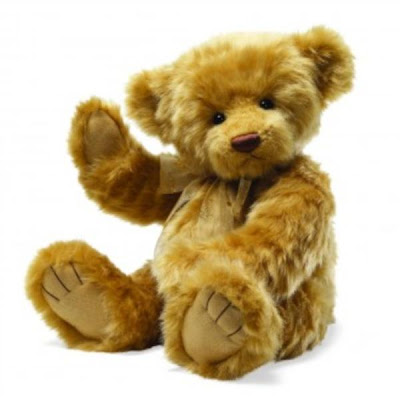 He felt so happy, snuggled tight in Amy's arms.

Amy was his favourite person in the whole world.

Cuddled up together in the stroller, they would watch the people, the cars, the clouds and the trees.

Amy would whisper little stories in Henry's ear about where she thought the people were going, or what they were doing, and Henry would listen in wonder.

It was such a big, wide world outside that stroller, and Henry was grateful for the firm grip that Amy had on him.

You see, Henry had been alone before.

At the shop, sitting on the empty shelf, just waiting for a family of his own.

His little glass eyes didn't show any emotion, but inside Henry had been miserable.

One by one the other bears on the shelf had been taken, until there was only Henry left.

Just as he started to give up hope, Amy's mother had come along and taken him home as a present for her little girl.

That was three years ago, and Henry and Amy had been best friends ever since.

They went everywhere together.

In the stroller, in the car, to the shops and to the park.

But Henry's favourite time was at night when Amy would hug him tightly as they both fell asleep.

The sun was warm and Amy was starting to feel drowsy.

They had been for a big play at the park, and Amy had taken Henry on the swings, the slide and the
round-a-bout.

Amy started to fall asleep, and as she did, she dropped Henry's paw.

Henry was watching a little dog scurrying past, and as Amy shifted in the stroller, Henry toppled over the side and onto the pavement!

Henry was waiting for Amy's mother to stop the stroller and pick him up, but she didn't see him.

She kept walking, getting further and further away.

He could do nothing but watch them fade away into the distance, and his little teddy bear heart broke in two.

Amy's mother lifted Amy into the car, and Amy woke up.

It took her a moment to realise that Henry wasn't there.

"Henry?" she asked her mother.

He mother looked, but couldn't find him.

Amy and her mother walked up and down the path but Henry was nowhere to be seen.

They walked all the way to the park and back to the car, but there was no lost little teddy bear anywhere.

Forced to concede that Henry might be gone forever, Amy's mother told a screaming Amy that they had better go home, but Amy refused to go anywhere without Henry.

"We have to find him Mummy! We just have too!"

Amy's mother gave one last scan of the area.

She looked at other children in case one of them might have been holding Henry, but no one was.

She looked at the grass alongside the path, just hoping that they may have missed a little brown bundle, but there was nothing.

Just as she was about to accept that her daughter's beloved bear was gone, she noticed a brown coloured item sitting on top of the wall separating the reserve from the car park.

It was a fair distance away, but even from there it looked familiar.

"Oh my stars" she muttered more to herself than to Amy.

"Please let that be our Henry!"

She hurried over, willing the stroller to go faster, and as they approached the wall, Amy saw him too.

"HENRY," Amy screamed at the top of her lungs.

And there he was, sitting facing them on top of the wall.

A passer by had found Henry on the pavement, and after asking a few people but not finding an owner, he had placed Henry up on the wall with the hope that the owner would notice him.

Henry was overjoyed when he had spotted Amy and her mother coming towards him.

That night, tucked up in bed, Amy held Henry that little bit tighter.

And Henry was that little bit more certain, that he was exactly where he was meant to be.

Linking in with Jess for IBOT