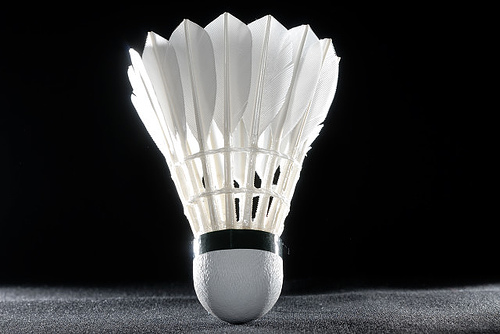 Welcome to Day Twenty Five of The November 30/30 Challenge.

I've always enjoyed playing badminton. I've only ever played it for a bit of fun with my family or friends, but I always thought it was kind of, well, easy!

Obviously I haven't been playing it properly, because when I watch the matches at the Olympics and Commonwealth Games, those players really work up a sweat!

According to the Fernando's Youth Badminton Academy, Badminton is:

"a racquet sport played by either two opposing players (singles) or two opposing pairs (doubles), who take positions on opposite halves of a rectangular court that is divided by a net. Players score points by striking a shuttlecock with their racquet so that it passes over the net and lands in their opponents' half of the court. A rally ends once the shuttlecock has struck the ground, and the shuttlecock may only be struck once by each side before it passes over the net.
The shuttlecock (or shuttle) is a feathered projectile whose unique aerodynamic properties cause it to fly differently from the balls used in most racquet sports; in particular, the feathers create much higher drag, causing the shuttlecock to decelerate more rapidly than a ball. Shuttlecocks have a much higher top speed, when compared to other racquet sports. Because shuttlecock flight is stubbornly affected by wind, competitive badminton is always played indoors. Badminton is also played outdoors as a casual recreational activity, often as a garden or beach game".

If you are the type of person that likes racquet sports, there are some great benefits from taking up Badminton for some exercise.
They include:

Think of all the frustration you could get out by beating that little feathered thing around the court, as well!

Yep, sounds good to me!