Last night, as I was watching one of my favourite shows 'Better Homes And Gardens', I was horrified to learn of the death of one of the most magnificent creatures on earth.

The most magnificent creature to me.

Mohan, the 'King' of Tiger Island at Dreamworld, had passed away at the grand old age of 17. 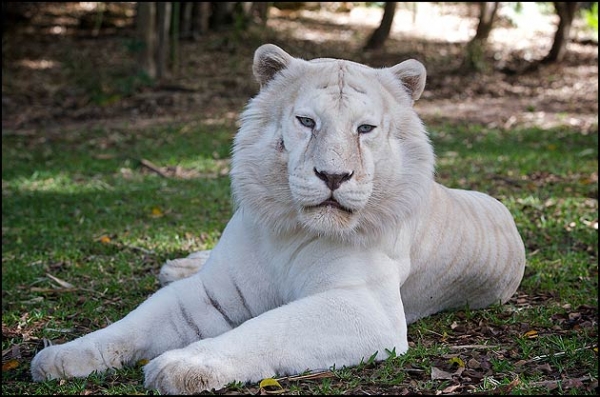 Now apparently this happened back in June, but we didn't hear anything about it here in Melbourne. Obviously down here, it just wasn't that bigger deal.

But it's a huge deal to me.

Back in 2003, I met Mohan personally. And it was an experience that, to this day, nothing has surpassed.

I had booked in to have a photo taken with the tigers at Dreamworld and I was so excited! I can remember, while my hubby (then boyfriend) and I were standing outside the enclosure with one of the keepers waiting to go in, saying something along the lines of I was going to wet my pants, and the keeper replying "You don't have to be scared." "Who's scared!" I said to him. "I can't wait to get in there! Let me at him!"
I think that might have actually scared the keeper a little bit!

Once I stepped into that enclosure, my life was never the same again.

Lying on a low timber deck, was the most enormous white tiger I had ever seen. And I mean huge! Sure, you see them on television, and at zoos, but it's not until you are standing right next to one, can you fully ascertain the enormity of this creature! Power emanated from every pore, and I went from feeling so confident and excited, to feeling vulnerable and minuscule, in a heartbeat.

His head alone was so big, that I would have had trouble putting my arms around it. Not to mention the fact that my arms would most likely have been ripped from their sockets in seconds, as easily as I could tear strands of cooked spaghetti.

His paws were twice as big as dinner plates, and I imagined him flinging me across the entire enclosure with the slightest little flick of his massive wrist.

His fur was so deliciously soft and the colour of Hokey Pokey icecream. I desperately wanted to throw my arms around him, and lie there with my head resting on his huge frame, but instead I slowly patted him like the keepers showed me, and barraged them with questions.

I needed to know everything about this majestic animal.

Mohan was one of the original Tigers that came to Tiger Island when it opened in 1995. He came to Australia as a young cub from the U.S, and is the father of Rama, Sita, Sultan and Tai, who were all born at Tiger Island in 1998.

At one point, Mohan decided he wasn't comfortable and stood, and I briefly saw a flash of fear in the keepers eyes. They were beside him instantly, urgently telling us to step back, while they got him resettled, and then we were able to move next to him once again. They gave him his favourite little carton of milk, and then he had a little doze while we all talked around him.

I think the whole visit took about fifteen minutes, but for me, it was over in the blink of an eye. As I was led from the enclosure, I looked back at him and we made eye contact. I felt like Mohan looked into my very soul. 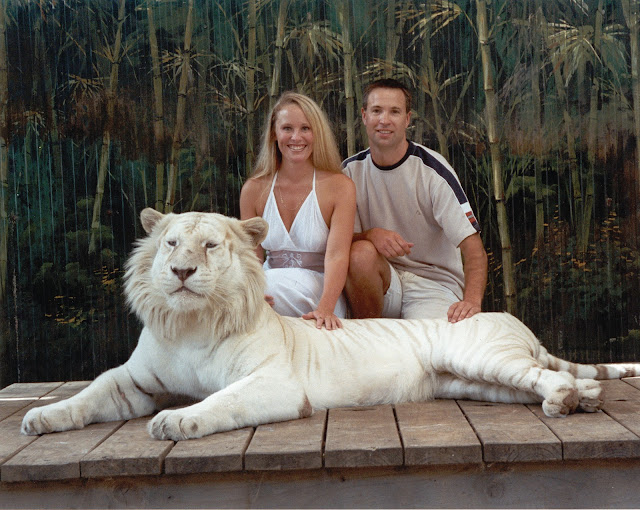 Meeting this most awe inspiring being was one of the happiest days of my life. And yesterday, hearing of his death, is one of the saddest. There are no white tigers left in the wild. That makes me feel sick as the words roll off my tongue....White.Tigers.Are.Extinct.In.The.Wild.

And their orange and black striped family members are not far behind.

Humans. Sometimes I'm ashamed to be one.

There is so much we can do to help, but that is for another post.

For now, I just want to say "Goodbye old boy. Thank you for allowing me to share your space, even just for those few minutes. The tears I cry now may not last forever, but the impact you had on me will. You were, and always will be amazing, and I treasure the way you touched me, and so many others.
May you spend eternity running through the rainforests in the stars, where you will always be magnificent, safe and King. Never forgotten, my wannabe furry headrest. I will always remember the feel of your fur on my hands, and have love for you in my heart. Run free my friend."

Linking up with Grace and the others for FYBF.